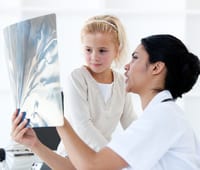 X-rays are imaging tests that produce images of the structures inside the body. X-rays use a type of radiation called electromagnetic waves to produce these internal images. As these waves penetrate the body, they are absorbed in different amounts by different body tissues. Bones are dense and absorb X-ray waves very well and the images appear very clearly, but soft tissues do not absorb the X-rays as well and are therefore harder to see on an X-ray image. Often used to confirm a fracture or a break in a bone, X-rays may be used to investigate lung conditions, digestive tract problems, arthritis, heart failure, breast cancer and other conditions. On-site X-Ray is available seven days a week at the Huntsville and Harvest locations of Premier Urgent Care for residents of Owens Cross Roads, Moores Hill, Hazel Green, Triana, Athens, Madison, Meridianville, Big Cove, and New Hope.

For some types of X-rays, a solution called contrast medium is given to the patient prior to the procedure, to help outline a specific body area on X-ray film. The contrast medium may be swallowed or injected into a vein. The patient will either stand on the floor or lie or sit on a table in an X-ray room, and depending on the reason for the X-ray, a technician positions the body in a way that gives the best view. The X-ray machine then produces a small burst of radiation (at a safe level) that passes through the body and records an image on a specialized plate. X-ray procedures commonly take only a few minutes for a bone, but may take longer for more-involved procedures, such as those using a contrast medium. After an X-ray, patients can immediately return to normal activities.

There are no side-effects associated with X-rays. X-ray equipment emits only a small amount of radiation and the risks of radiation exposure are extremely low. Lead aprons and other types of lead shields are often used to protect other parts of the body during the procedure. Because a fetus is more susceptible to harm from radiation, pregnant woman should always inform their doctors before having X-rays.

Although X-rays do not cause pain, patients may experience some discomfort by the positions they are asked to assume during the procedure. If contrast material has been administered, patients may experience a few side effects, such as a feeling of warmth in certain parts of the body, lightheadedness, or a metallic taste in the mouth. It is also possible that some patients will be allergic to the contrast dye.